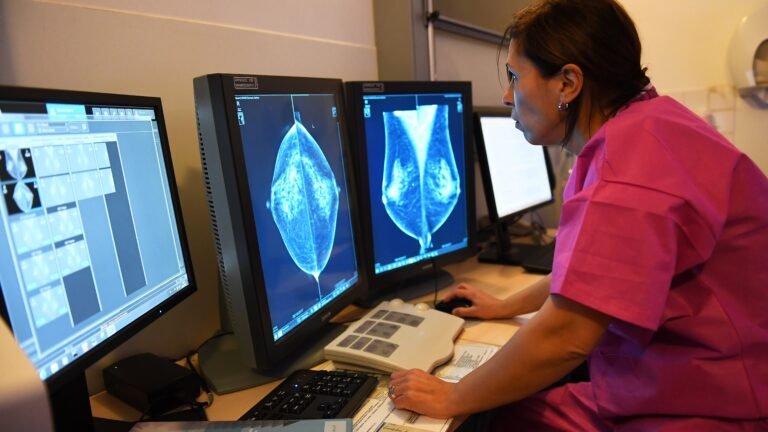 Black women die earlier and more often of breast cancer. Should they be screened sooner?

For years, health experts have recommended that, starting at the age of 50, every woman should get a mammogram every two years. But Christina Chapman, an oncologist and researcher at the University of Michigan, looked at the devastating disparities in breast cancer outcomes for Black women and wondered whether medicine could serve Black women better with a different recommendation just for them. Fewer women die of the disease now than 20 years ago, partly thanks to mammograms, but that progress has not been equal. Black women have historically died from breast cancer at higher rates than white women, and that gap has widened in recent years despite a decline in the overall mortality rate. “In addition to the higher death rate, Black women are likely to get cancer at younger ages, a more aggressive subtype, and not receive adequate treatment as often,” Chapman said. “When you consider all these factors, it means Black women might benefit from a different screening schedule compared to other populations.”

Chapman set out to study whether breast cancer disparities would start to dry up if Black women started receiving screening a decade earlier than white women. It’s nearly impossible to pull together the time, money, and participants to run an experiment like this in the real world, she said. So, cancer researchers often use a statistical model known as CISNET to test different screening scenarios.

Chapman and her team modified this model to include race and simulated 100 million digital lives to see what would happen if Black women began mammograms at age 40. The model predicted starting screenings earlier would reduce breast cancer deaths in Black women enough to shrink the gap in breast cancer deaths among Black women and white women by 57%. They reported their findings in Annals of Internal Medicine on Monday.

“One really important part of that is screening 10 years earlier [in Black women] results in the same values of benefits and harms of screening white women at age 50 and saves more lives,” Chapman said. “We consider that equity.” Screening authorities like the U.S. Preventive Services Task Force — an independent panel that sets screening recommendations largely followed in the U.S. — could take her results into consideration to help achieve health equity, Chapman said. Chapman and other experts emphasized that the disparities seen in breast cancer outcomes are not directly related to race, which is not a biological construct. “It’s rooted in racism, where Black women are less likely to have health insurance, less likely to have high-quality care,” she said. “That’s based on someone who looks Black and that Black appearance results in them receiving racism.”

In reality, cancer screening is rife with trade-offs, said Michael Hassett, an oncologist at Dana-Farber Cancer Institute who wasn’t involved in the research. Mammograms aren’t perfect. Sometimes they have false positives, which can result in unnecessary follow-ups and painful biopsies. Other times, they might detect a tumor that’s cancerous but, paradoxically, not dangerous because its growth is so slow. These women may end up getting unneeded treatments and surgeries that have their own risks and harms. The more you screen, the more likely these unintended outcomes become. In a perfect world, doctors would know exactly which patients have higher risk for breast cancer and which ones don’t. Then, Hassett said, they’d be able to screen the highest-risk patients earlier and more frequently, and the lower-risk patients less. “It makes a lot of sense to adapt screening to patient characteristics,” Hassett said. “The next question is, what are the factors that should be included in that approach? Is self-identified race one of those factors?” In the past, attempts to use race in medical decision-making have caused harm, said David Jones, a medical historian at Harvard University, partly because they wrongly assumed people of a single self-categorized race share certain biology or even certain life experiences. “If you see someone with dark skin or self-identifies as Black, do you know anything about their experience of racism?” Jones said. “They may have nothing in common. Why would you assume that they do?”

The information contained in this article is for educational and informational purposes only and is not intended as health or medical advice. Always consult a physician or other qualified health provider regarding any questions you may have about a medical condition or health objectives.